The main idea is to create an API for analysis and prediction of fuel consumption. Up to now, our focus lay on fishery vessels that are supposed to travel from their current location to a new destination. Given some surrounding conditions and internal measurements we analyze and predict the fuel oil consumption per nautical mile using statistical methods. For training and testing purposes we were provided with full datasets from two vessels over several years each. The overreaching goal is to make live suggestions on how to minimize the consumption for the duration of the travels.

The goal for this Hackathon is to create a RESTful API to be able to access the generated models and make predictions given new data on the fly. We plan to finalize the requirements for the API and have a working prototype by the end of the coding sessions.

There is a lot of big data available in the connected cities of today. Often, this data is stored for restrained purposes without any deeper analysis and visualisation.  Users thus do not benefit from the data and from its understanding that would allow them to act based on the information obtained from data. Cities usually do not know how to work with their data further to get the knowledge out of it that could support the decision making.

The proposed application will help the city of Plzeň (Czechia) to  identify trends and patterns in their security-related data provided by the Municipal Police, e.g. to identify areas with the highest risk of minor criminality, streets with most frequent parking, driving or speed violations, locations with pedestrian or cyclist offences, or neighbourhoods with alcohol- and drug-related offences. The web application will bring the data into a map and make it possible to analyze it for trends and patterns. 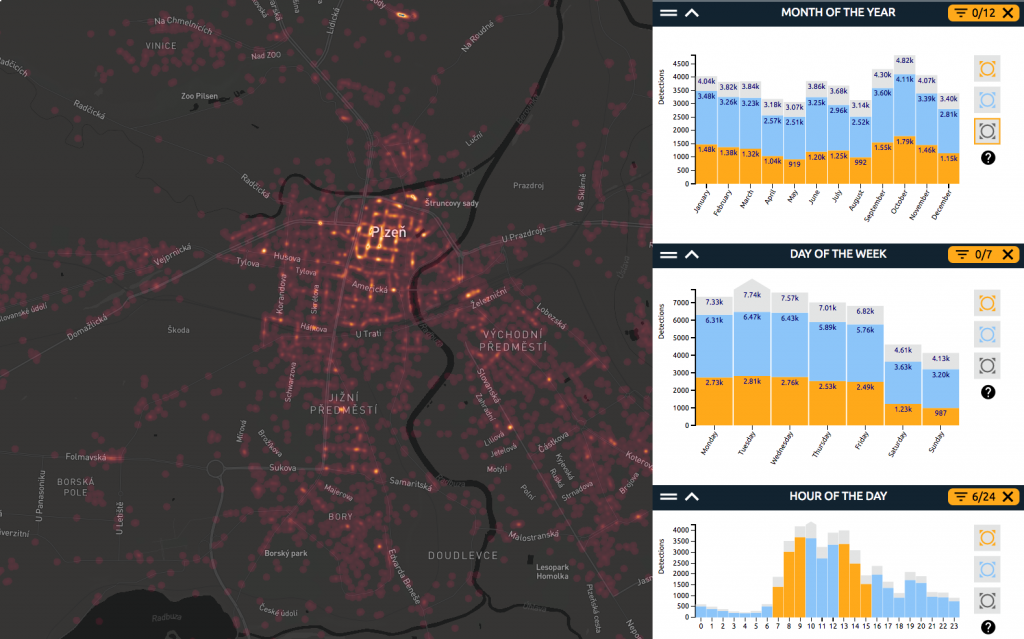 Thanks to the solution, users will benefit from visual insights obtained from the data. They can drill into the data, look at different combinations of attributes (such as specific hours or days of the week), and understand where the records and the riskiest areas are located on the map.

The city’s manager for criminality prevention can use the solution to discover locations where the city security police measures should target. Police commanders can use the app to identify most risky areas to which the police officers shall be sent to increase safety of citizens. The public can benefit from the higher awareness about the security-related issues in the city.

The library is based on WebGL and uses GPU (graphical processing unit)  for fast rendering and filtering of data. Using commodity hardware (an average PC) the library can visualise hundreds of thousand of features with several attributes through a heatmap, point symbol map.  The library can render the data on the map provided by third party libraries (e.g. Mapbox, OpenLayers, Leaflet, GoogleMap API).

Main advantages of our technology compared to common products on the market:

The data for the first release of the application is provided as a sample DB export. It’s planned for the future that the data will be regularly updated and provided by the city through an API.

NOTE: even though the data was anonymised, it contains sensitive data that the owner of the data currently cannot make public. Therefore, due to security reasons, the dataset is currently not available as open data. The application will therefore be protected by a password and at this stage will not be available to public. However, it can be demonstrated during the hackathon presentations. It’s planned that after future prior agreement with the Municipal Police, a new release of the app might be developed with a subset of data that can be made available to public.

PROJECT IDEA:  The targeted area is sustainable aquaculture and bio-economy. We want to combine different types of met-ocean data (e.g. ice edge, SST) and fishery statistics to investigate potential links between climate change and activity in the polar region in and around Svalbard. We will evaluate if the FAIR principles are met for the chosen variables, using Copernicus, BarentsWatch and other open data resources. Accessibility and functionality of the related APIs will be assessed, and whether the chosen APIs can jointly provide new information.

Current climate zones maps are very generic. These show large areas and display only some differences in topography. Characteristics such as seaside buffer zones, weather divides or South-North differences are usually not accounted. The idea is to provide local agro-climatic maps by processing detailed Earth Observation data for topography and land cover.

Such improvements in the climate zones would support local/within-field management strategies. For researchers it may be of interest to use this dataset for decisions related to field trial (climatic) representativeness. Agronomists and insurances may find this dataset useful for risk assessment.

Last but not least, researchers and advisors may find important to check the impact of climate change on given area and decide about future management strategies.

The local climate maps will take following factors into account:

PROJECT IDEA: The idea is to expand Open Land Use map by computing main terrain characteristics of agricultural fields (LPIS blocks). So far for computation two datasets will be used 1arcsecond DEM dataset by USGS and Open Land Use map (for masking fields). The experimental area will be Weinviertel (province located in the norteast of Lower Austra).

Otherwise as well as get the statistics it is also possible to download characteristics as TIF images:

A lot of energy has gone into the development of precision data both with regards to fundamental geospatial data such as basemaps and thematic data serving a single purposes for specific and narrow target audiences.  This idea seeks to use such data to elaborate detailed characteristics about places based on the co-occurrence of certain features or phenomena.

An example of how such characteristics could be used, let us consider the following. The accessibility of a place may be described in terms of its proximity to transport hubs for air, train and road transport. That gives a snapshot of the current state of the area; however — by incorporating planned and future developments, it is possible to characterize a place by how it is likely to be two years from now. The climate of a place can be described in terms of monthly averages, averaged over 50 years of aggregated data for precipitation, air temperature, sea temperature, cloud cover, snow cover etc. The terrain can be characterized in terms of its ruggedness, whether it is a platou, a plane, coastal, mountaineous or otherwise. There is a near infinite number of characteristics that can be considered — in themselves they are not necessarily particularly useful — but combined the right way they may predict trends and offer location insights that are useful both to individuals, private enterprises and regional development bodies.

I.e. by identifying all places in the mountains that has rugged terrain and that has a long and steady period of snow cover with cold frequent sunny days — and with a new infrastructure hubs being developed within 75 minutes drive away — but scores low on availability of visitor oriented services we have established a dormant economic potential. This sort of location intelligence is thus far the material of reports.

This team will be operating in a mixed technical and non-technical manner. On the one hand we will expand upon the business cases in an exploratory manner through conversation; on the other we will try to identify practical sources and algorithms to determine key characteristics for places, taking as a starting point a seed database of about 20 000 locations and a bunch of climate, land-cover and landscape characteristics that have already been calculated.

PROJECT IDEA: Map based web application for identifying of usable remote sensing data from Sentinel satellites. A user can choose one or multiple positions (for example fields, forests etc.) and the application prepare a forecast based on location, minimal satellite elevation and minimal crossing duration for Sentinel 2A and 2B satellites. The application calculates timetable of satellites crossing time and weather (clouds) forecast as a result. User gets information when his selected position(s) can be photographed and which imagery can be used for further processing.

PROJECT IDEA:  Smart Points of Interest (SPOI) increased the number of points from about 27M to more than 30M. The goal of this working group is to improve the SPOI dataset, both by extending and improving the underlying model (ontology), and to enrich the knowledge base with links to other relevant datasets.  Regarding the ontology, we aim to include properties definitions, mappings to other vocabularies to the current taxonomy of classes, and possibly additional terms for annotations/ratings,

Regarding the dataset, we aim to discuss and find possibility of linking with review/ratings datasets, relevant eurostat indicators, and others that may be identified during the hackathon.

PROJECT IDEA: The idea is to integrate Czech LPIs data with other RDF datasets, including the definition of sample sparql queries based on relevant use cases. We will use FOODIE ontology. FOODIE ontology has been generated from FOODIE application schema (UML model), Revision 4.3.2, and translated into an ontology according to ISO/DIS 19150-2 with several modification using ShapeChange.

For the beginning we defined next use cases:

Use Case #1 – buffer zones around water bodies (user will specify the distance). Result is a new shp datasets which define the areas within the fields with limited/restricted application of agro-chemicals.

Use Case #5 something more complex – to select all fields with certain crop in max distance from certain point (it could be for logistic, distribution of biomass etc)

The idea is to generate RDF data from SensLog on the fly, so that it can be streamed all the observations in real time.