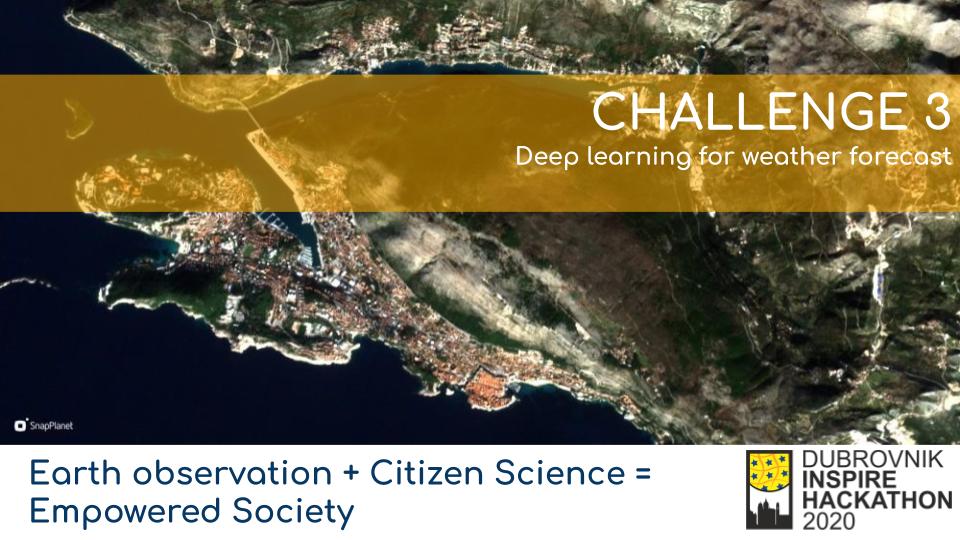 The goal of the challenge is the adaptation of machine learning for the weather forecast in the local environment. The global historical data about climate conditions over a specific area (i.e. temperature, humidity, etc.) and also with greater dense time-series from sensors covering the same area will be used. The precise combination of these data with a compound of algorithms of deep learning can lead to weather forecast enhancement. The entire problem can be seen as a prediction of multivariate spatial data with different accuracy and importance.

In the field of neural networks, there are exists a kind called recurrent neural network (RNN) into which belongs architecture Long Short Term Memory (LSTM). LSTMs are explicitly designed to avoid the vanishing gradient problem. Hence there broadly used for time-series prediction.

Further, a radial basis function (RBF) networks are commonly used for function approximation problems. An RBF network is a type of feedforward neural network composed of three layers that use radial basis functions as activation functions. These networks are distinguished from other neural networks due to their universal approximation and faster learning speed.

And last, not least Bayesian Neural Network (BNN). Bayesian Neural Networks (BNN) is NN whose weights or parameters are expressed as a distribution rather than a deterministic value and learned using Bayesian inference. Their innate potential to simultaneously learn complex non-linear functions from data and express uncertainties.

Tasks for this challenge can be wrapped-up as follows:

Yes, I want to register for Challenge #3!